On September 15th, the fifth "China Charity Culture Forum" co-hosted by China Charity Alliance and Dongrun Foundation was held in Beijing. Mr. Bang Chen, Chairman of AIER Eye Hospital Group (referred to as AIER) was invited to attend and deliver a keynote speech.

Mr. Bang Chen said that breaking new ground in practical cooperation and the unity of inner knowledge with action is the blood of charity in Hunan. From this, AIER has developed a new road to charity with national consciousness, global mindset and sustainable development. In a word, continue to benefit society with AIER’S efforts for China's charity and spreading love everywhere AIER goes.

The fifth China Charity Culture Forum take "Entrepreneurship and philanthropic culture" as the theme, in the context of the Third Distribution Undertakings in China and the promotion of common prosperity for all, the forum invited a dozen outstanding delegates from the charitable, business and academia sectors, discussed how to integrate contemporary Chinese entrepreneurship with modern charity culture, shape contemporary Chinese spirit and enhance the core of Chinese values.

Puguang Gong, Vice-Chairman of Social Development Committee of The National People's Congress (referred to as NPC ) and President of China Charity Federation, Gongcheng Zheng, a member of the Standing Committee of the NPC, Professor at the Renmin University of China and Vice Chairman of the China Charity Alliance , Yanzhen Zhang, former Vice Minister of the Ministry of Justice and Chairman of the China Legal Aid Foundation, Dongmei Kong, Chairman of Dongrun Foundation, and others attended the forum.

Corporate donations account for over 60% of total social donations

Corporate donations have accounted for more than 60 percent of China's total social donations in recent years, Mr. Puguang Gong said in his speech. Corporate donations cover medical and health care, poverty alleviation, education and other fields, it has played an irreplaceable role in epidemic prevention and control, winning the battle against poverty, improving community-level social governance, as well as promoting high-quality economic and social development in China.

Mr. Puguang Gong, Vice-Chairman of Social Development Committee of the NPC and President of the China Charity Federation

Mr. Gongcheng Zheng, a member of the Standing Committee of the NPC, Professor at the Renmin University of China and Vice Chairman of the China Charity Alliance

More than 700,000 charitable ophthalmic operations have been performed for poor patients with eye diseases over a decade

In the TED speech session, Mr.Bang Chen, Chairman of AIER delivered theme speech <Take action as a starting point: from the development of "do good works" to "charity work" >, breaking new ground in practical cooperation and the unity of inner knowledge with action is the blood of charity in Hunan, AIER also inherits the traditional charity work all along. 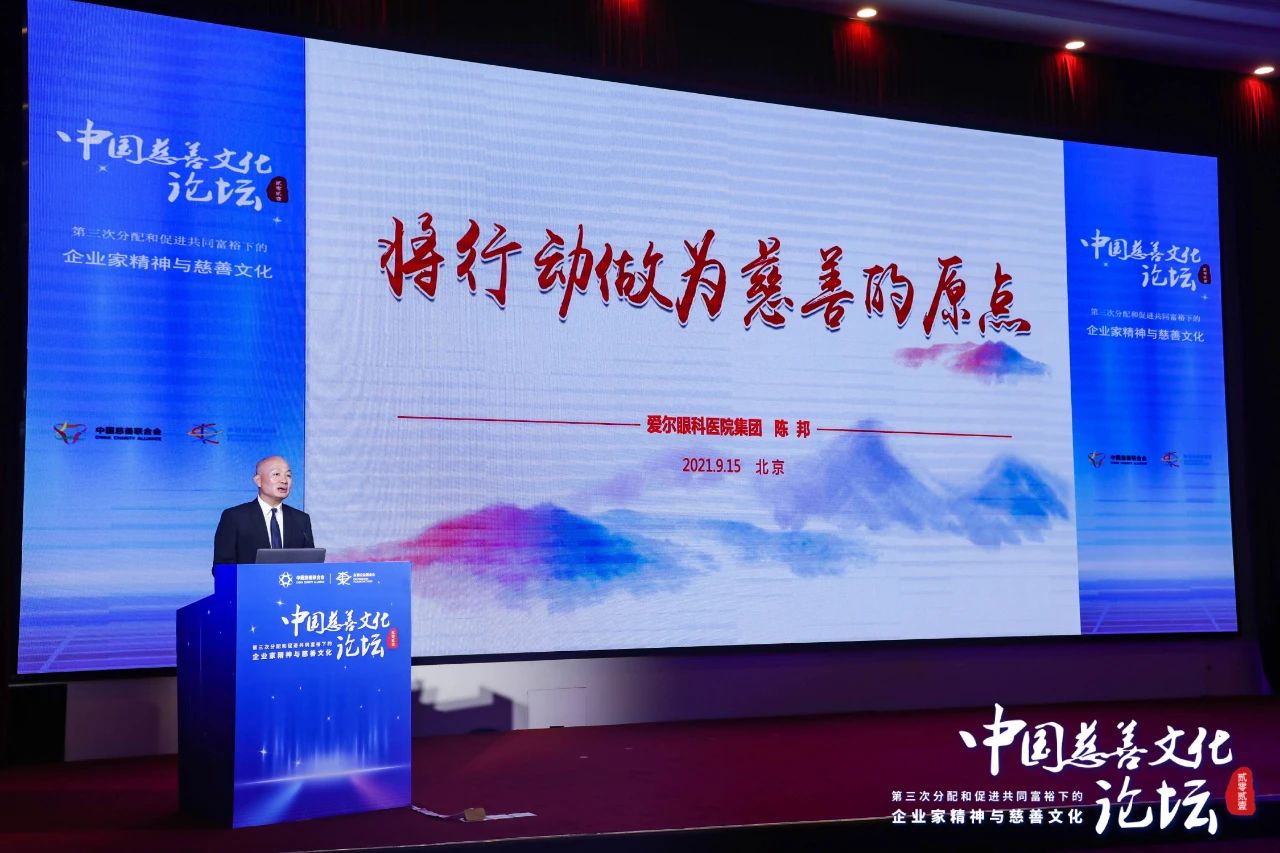 Mr. Bang Chen pointed out that in modern society, AIER charity has also shown new traits. The first is to have national consciousness. In response to the party and state, AIER has been proactively participating in public welfare by taking actions for poverty alleviation and carrying out the "Healthy China initiative", More than that, AIER has always been shouldering responsibilities and missions from poverty alleviation to rural revitalization, aimed at a prominent problem "Poverty due to illness", assisting put all national policies into effect at the community-level.

Up to now, AIER has helped nearly 700,000 impoverished eye disease patients to see the world again, contributing 11% to China's CSR. Eye health clinics and eye education seminars have covered 180 million people. The medical team of AIER went to Myanmar, Laos, Cambodia and other countries as well as 31 provinces, autonomous regions and municipalities directly under the central government in China. For this reason, AIER was awarded the "China Charity Awards" for two consecutive years, and successively won the "China Charity Enterprise", "Best Listed Company with Social Responsibility", "Hunan Charity Awards" and other honors. Mr. Bang Chen, Chairman of AIER has been honored as "Excellent Builder of Socialism with Chinese Characteristics" in May this year.

The second is to have a global mindset. Since the virus go on a rampage last year, AIER has not only provided surgical assistance and donated anti-epidemic materials to foreign countries, but also summarized its experience in effective COVID-19 prevention to share with the world AIER's knowledge and showed the global brand image.

Third, philanthropy and public welfare should be sustainable. The region's health problems can not be solved by one time or one thing. By integrating social responsibility into corporate strategy, enterprise charity activities can be more efficient along with long-term development. With its "cross-subsidy" model, AIER provides patients with higher quality services, in the meantime dedicate itself to social welfare and helping vulnerable groups to promote the cause of fighting blindness and national eye health, making big strides on the path of sustainable development of charity and public welfare undertakings.

Mr. Bang Chen said that "action" is the origin of the road to a charity of AIER, AIER will pragmatically develop philanthropy as part of development strategy to enhance and deepen the mission: "Enabling everyone, whether rich or poor, has the right to eye health". In the future, AIER will further strengthen the national consciousness, broaden the international perspective, adhere to sustainable development, and continue to contribute to the "Healthy China initiative"!